From Professor Wheeler: “When we talk about Early Modern Spanish drama, we tend to talk almost exclusively about theatre in Madrid. There are valid reasons for this but, in this talk, I will advance the hypothesis that a holistic understanding of Golden Age drama demands an appreciation of the interrelationships between art, theatre and everyday life in Seville as important precursor to and influence on subsequent developments in the Spanish capital.” 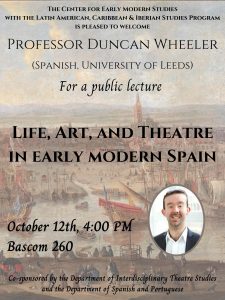 The talk is funded by the program of Latin American, Caribbean and Iberian Studies (LACIS) and co-sponsored by the Center for Early Modern Studies (CEMS), Interdisciplinary Theatre Studies (ITS) and the Dept of Spanish & Portuguese.

Professor Zuckert will also participate in a political theory workshop on October 14. More details may be found here. 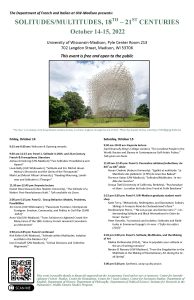 Please see the attached poster for the full program. 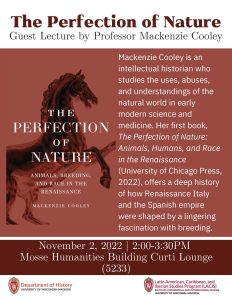 “The Perfection of Nature: Animals, Breeding, and Race in the Renaissance,” a lecture by Professor Mackenzie Cooley (Hamilton College), November 2nd. 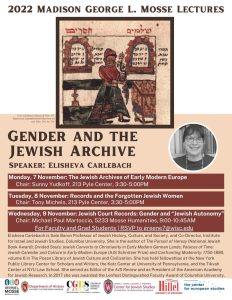 – Wednesday November 9th, 3:30-5:00 PM: Jewish Court Records: Gender and “Jewish Autonomy” in the Curti Lounge. This workshop will include pre-circulated translated primary sources (a Jewish civil court and its record) and a paper for participants to discuss. 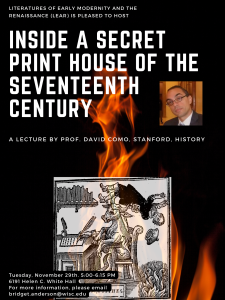 “Inside a Secret Print House of the Seventeenth Century,” a lecture by Professor David Como (Stanford University), November 29th.

Hosted by the Early Modern Colloquium.