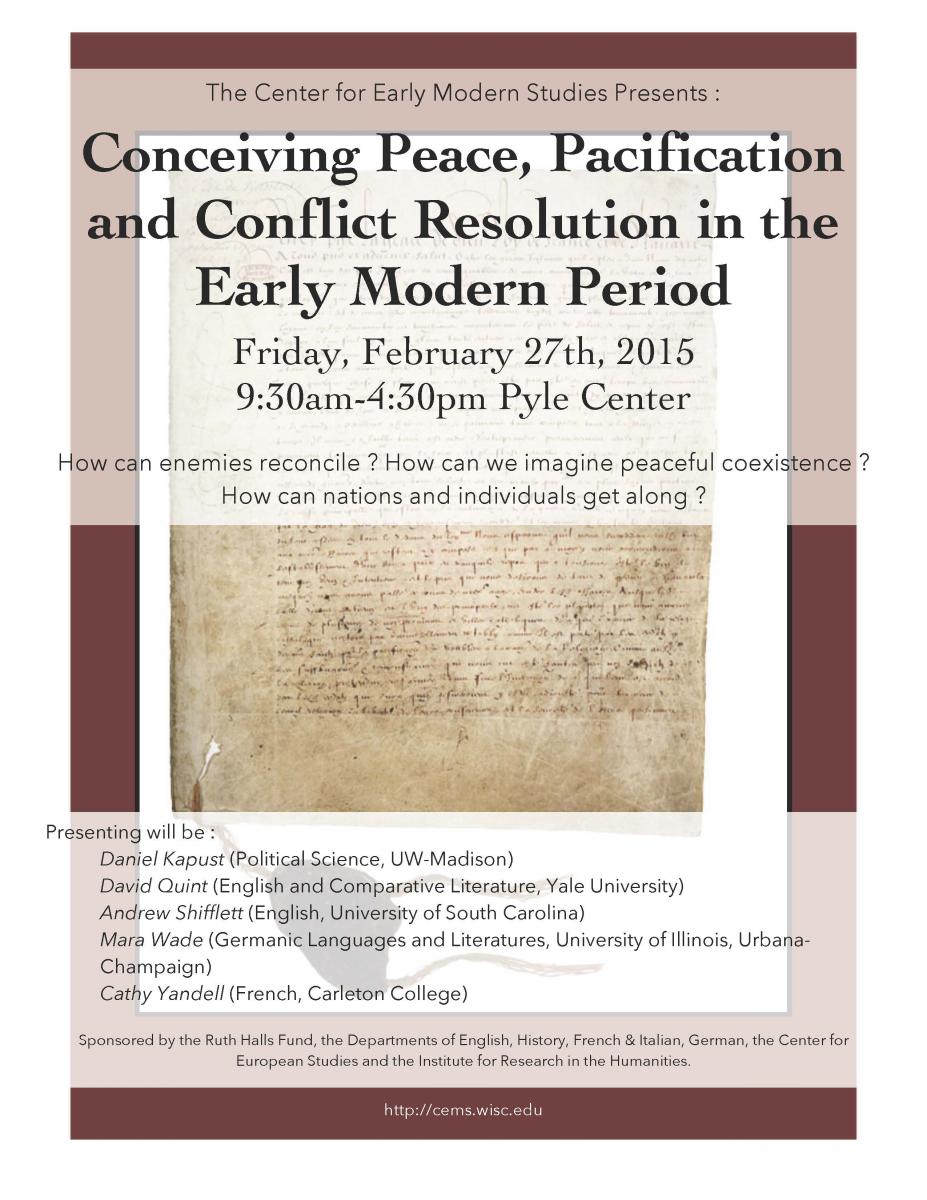 This conference will touch on several interrelated questions : how can enemies reconcile? How can we imagine peaceful coexistence? How can nations and individuals get along?

The early modern period was witness to wars and civil strife of unheard-of dimensions, fueled not only by traditional political ambitions of sovereigns but by religious differences within European populations and the brutal beginnings of colonial conquest. When conflict did not result in simple elimination of the adversary (for example, by genocide or forced conversion), some means had to be found to reintegrate the former enemy into the community, or to reinvigorate diplomatic and commercial ties with a defeated nation, if the conflict had been international. Nations could resort to treaties; regimes could institute rules of “pacification” for formerly warring parties within the community, in anticipation of what we now call “toleration” of minorities. England, France, the Netherlands and the German countries all underwent horrific civil warfare during the Reformation and its aftermaths, and produced varying solutions to this conflict.

This conference is designed to give us some insight into how pre-secular regimes were able to imagine civil and international peace and to apply principles of pacification. The conference will draw on the expertise of scholars from literature and intellectual history, in the areas of English, French, German studies, and Political Science. We will include as well colleagues and advanced graduate students from the UW-Madison.

Among our speakers will be :

Daniel Kapust (Political Science, UW-Madison). His research focuses on the history of political thought, especially Roman, Florentine, early modern, and the 18th century, along with rhetoric, democratic theory, and the republican tradition. He is currently working on a second book project on flattery and political theory, entitled Flattery in the History of Political Thought: That Glib and Oily Art. Additional projects include articles on rhetoric and character in Cicero and Adam Smith, deliberative democracy and international relations, and fear in Hobbes and Lucretius.

David Quint (English and Comparative Literature, Yale University).  He is particularly interested in the larger cultural meanings vested in literary and generic forms. Quint is the author of Origin and Originality in Renaissance Literature (1983); Epic and Empire (1993); Montaigne and the Quality of Mercy (1998) and Cervantes’s Novel of Modern Times (2003). He has translated The Stanze of Poliziano (1978) and Ariosto’s Cinque Canti (1996). He has published essays on Virgil, Spenser, Shakespeare, Milton, Bruni, Castiglione, Flaubert, and Cervantes. He is the co-editor of Renaissance Theory/ Renaissance Texts (1986).

Andrew Shifflett (English, University of South Carolina) is the author of Stoicism, Politics, and Literature in the Age of Milton (Cambridge, 1998), essays on Sir Philip Sidney, Ben Jonson, Andrew Marvell, Abraham Cowley, Katherine Philips, and John Milton, and has served as editor of three volumes of Renaissance Papers. His current book project is entitled Literature and the Power of Forgiveness in Early Modern England.

Mara Wade (Germanic Languages and Literatures, Comparative and World Literatures, Gender and Women’s Studies, University of Illinois, Urbana-Champaign). She is the managing Editor of Emblematica and the PI for Emblematica Online, an NEH funded multi-year, international research project. Most recently she has edited Gender Matters (2014); with Sara Smart (Exeter University) The Palatine Wedding of 1613, Context, Celebration and Consequence of An Anglo-German Alliance. Wolfenbüttel Abhandlungen zur Renaissanceforschung (2013), which earned the Weiss/ Brown award in Renaissance Studies, Newberry Library, Chicago; and Emblem Digitization: Conducting Digital Research with Renaissance Texts and Images 2012, in Early Modern Literary Studies, Special Issue 20) http://extra.shu.ac.uk/emls/emlshome.html. Her interests include the “mise-en-scène” of reconciliation in emblems.

Cathy Yandell (French, Carleton College). Her research focuses on the body, temporality, poetics, and gender in Renaissance France. Having published articles on writers from Marguerite de Navarre to Montaigne, she has also authored, edited, and co-edited several books including Carpe Corpus: Time and Gender in Early Modern France (2000) and Vieillir à la Renaissance (2009). Her current project explores the relationship between the body and knowledge, or “ways of knowing,” from Rabelais to Descartes.  She is also writing on the chancellor Michel de l’Hospital, a major figure in reconciliation attempts during the wars of religion in France. 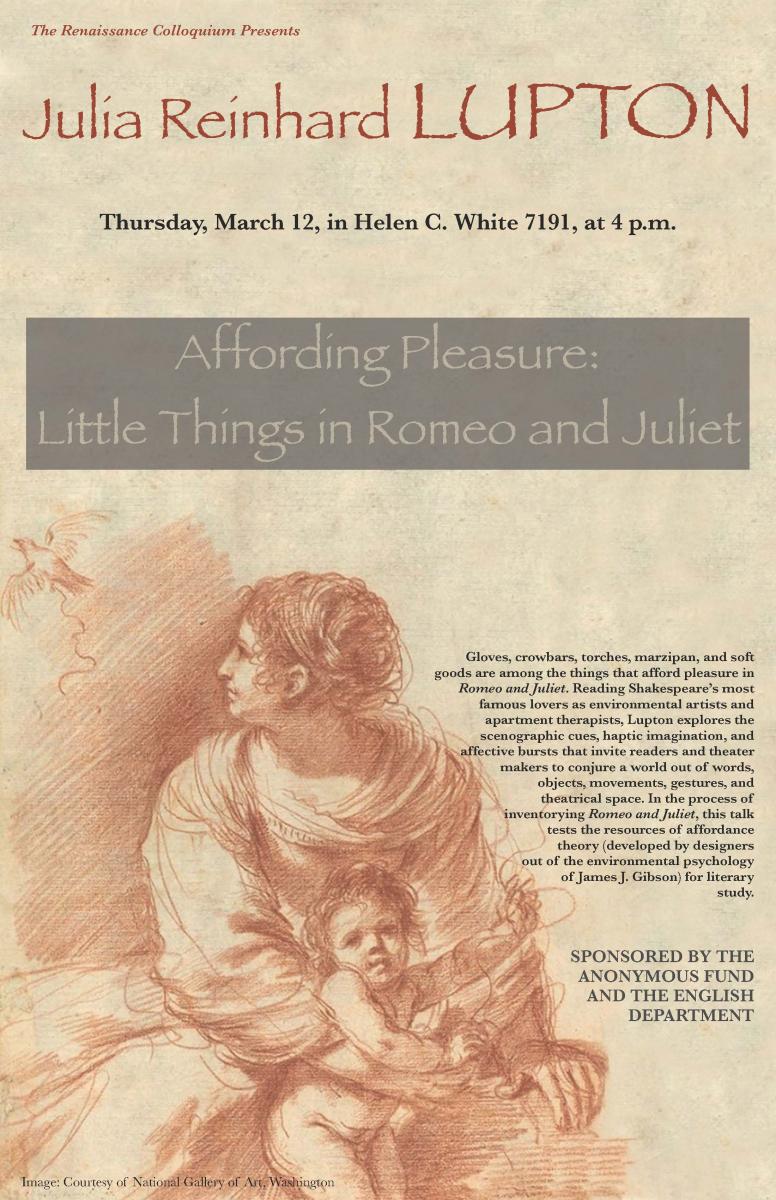 Gloves, crowbars, torches, marzipan, and soft goods are among the things that afford pleasure in Romeo and Juliet. Reading Shakespeare’s most famous lovers as environmental artists and apartment therapists, Lupton explores the scenographic cues, haptic imagination, and affective bursts that invite readers and theater makers to conjure a world out of words, objects, movements, gestures, and theatrical space. In the process of inventorying Romeo and Juliet, this talk tests the resources of affordance theory (developed by designers out of the environmental psychology of James J. Gibson) for literary study.

Julia Reinhard Lupton is Professor of English and Associate Dean of Research, School of Humanities, at the University of California, Irvine. She is the author or co-author of four books on Shakespeare, including Thinking with Shakespeare and Citizen-Saints. She has also written two books on design with her sister, designer Ellen Lupton. She is a former Guggenheim Fellow and a current Trustee of the Shakespeare Association of America. She is completing a book entitled “Shakespeare Dwelling: Habitation, Hospitality, Design,” under contract with the University of Chicago Press. 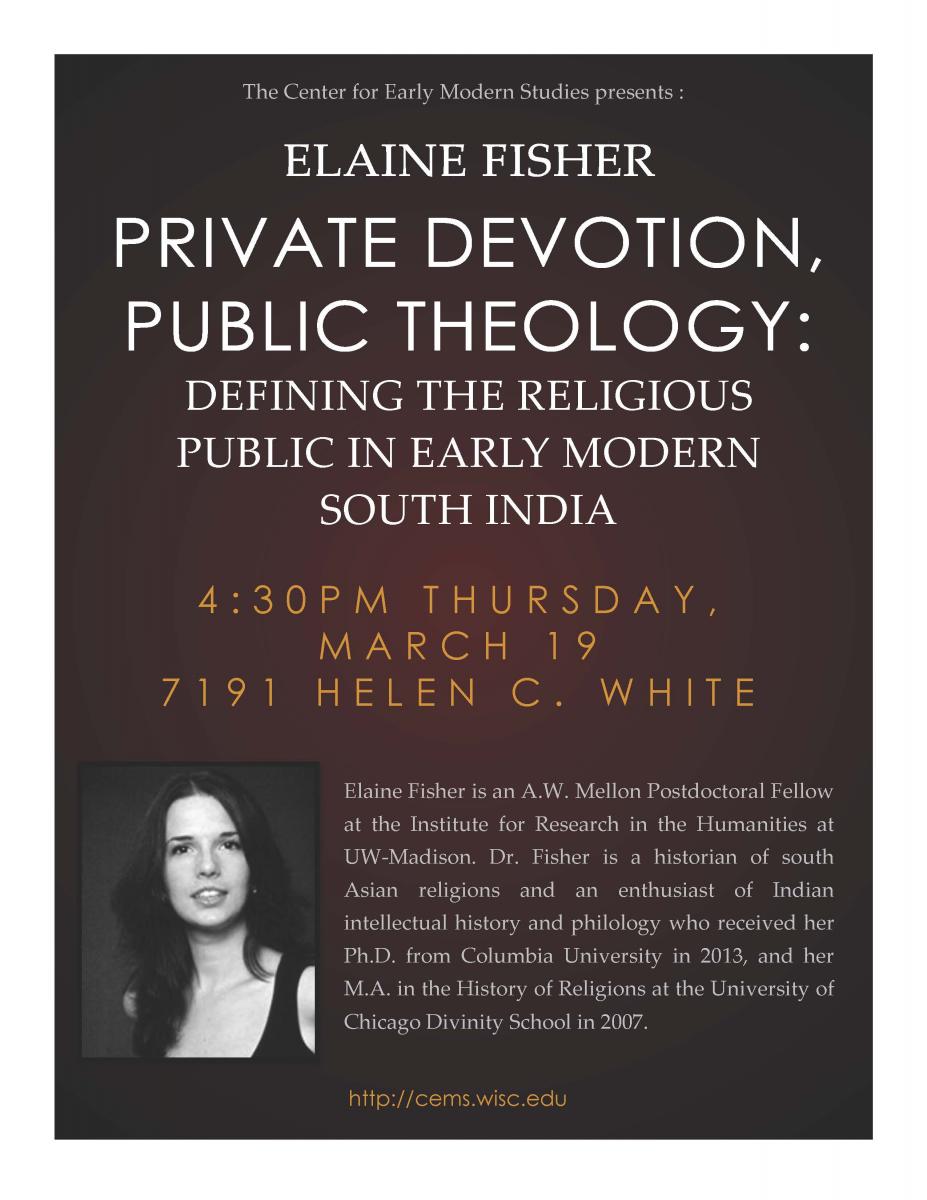 By the seventeenth century in the Tamil country, the Hindu religious landscape had experienced a radical sectarianization: the lines between communities and institutions were far less permeable than in previous centuries. Through what amounts to a wholesale theologization of public discourse, Hindu sectarian theologians, beginning in the early modern centuries, began to consciously craft an orthodox, public Hinduism that overlaid, but did not erase, the diverse religious expression of Hindus in each caste and locality across the Indian subcontinent.  This paper approaches the formation of these discrete religious publics through the case study of the Smārta Śaiva community, also known as Tamil Brahminism, which first originated in its contemporary form in the seventeenth century, and remains today one of a handful of Hindu sectarian communities that dominates the religious landscape of the Tamil country in the far south of India. I aim to demonstrate that through the emergence and codification of these discrete religious publics, during the early modern period in south India, there emerged a gulf between private sentiment and public speech that marks a crucial shift in Hindu religiosity.  The nature of religious publicity, as a result, raises a number of intriguing comparative questions about the nature of individuality and the place of religion in early modernity around the globe.

Elaine Fisher, A.W. Mellon Postdoctoral Fellow in Middle Eastern, South Asian and African Studies, is a historian of south Asian religions and an enthusiast of Indian intellectual history and philology. She received her Ph.D. from Columbia University in 2013, and her M.A. in the History of Religions at the University of Chicago Divinity School in 2007. Her dissertation examines the historical emergence of Hindu sectarianism in the centuries prior to British colonialism, an era that defined the shape of Hindu religious communities in India through the present day. Drawing on unpublished manuscript and archival sources in Sanskrit, Tamil, Telugu, and Marathi, she documents the origins of the Smārta-Śaiva Hindu tradition—or Smārta Brahminism—in south India, mediated through the writings of leading Śaiva public theologians. She is at work on a project entitled “Renaissance Without Reformation: Hinduism and the Public Sphere in Early Modern South India.”

What We Don’t Know: Early Modern Studies and the limits of knowledge

For our Spring semester roundtable discussion, the Center for Early Modern Studies will host a panel investigating the following questions :

CEMS Round Table: How Would I Teach the Early Modern Period?

Join us for an informal round table to start off the new academic year. 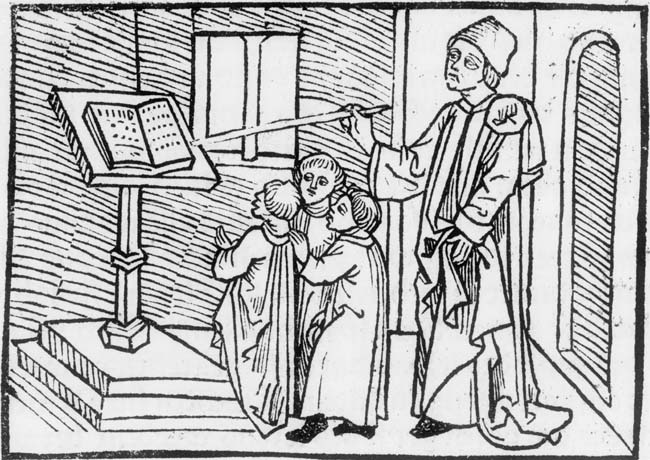 On October 2, from 4:00 PM to 6:00 PM, we will be discussing the special opportunities and challenges of teaching early modern culture. 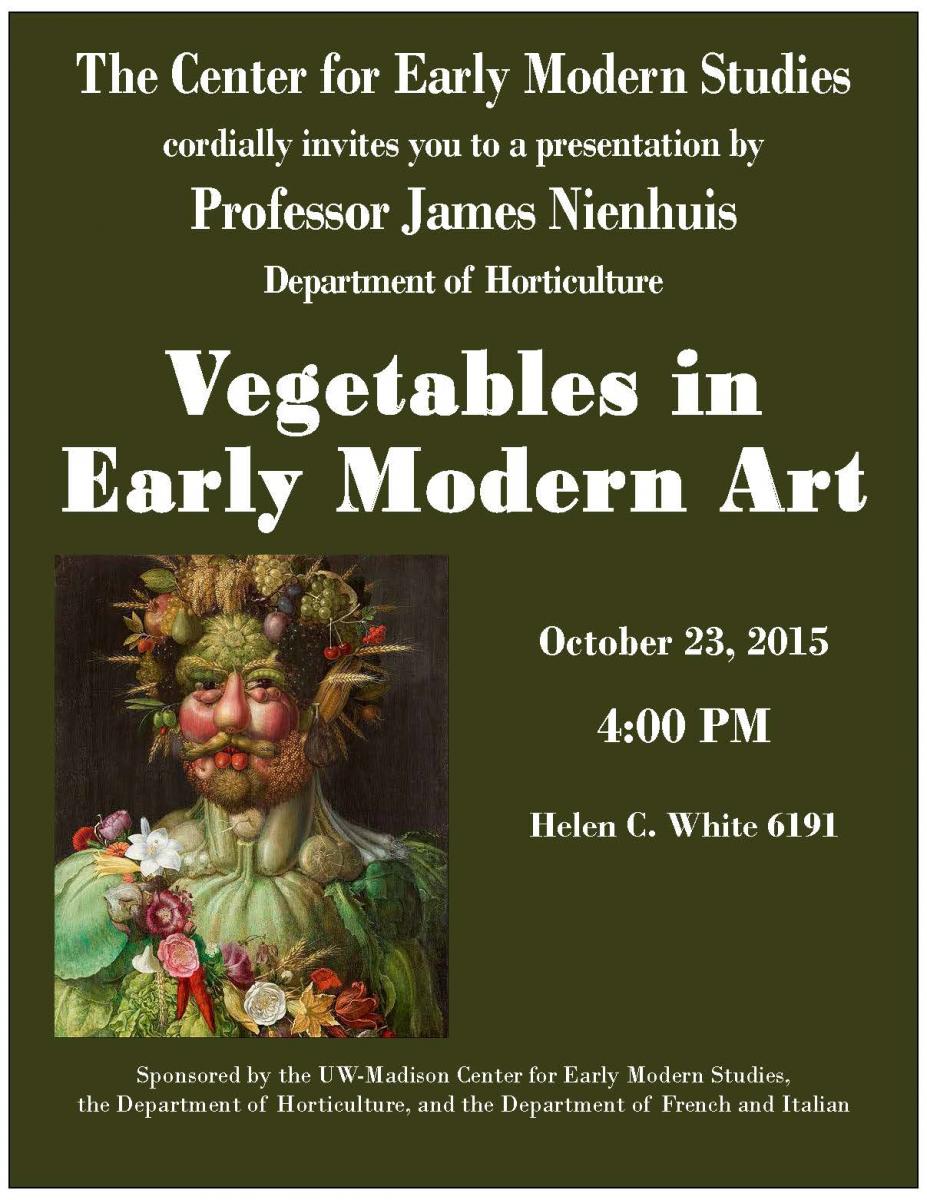 Professor James Nienhuis, of the UW-Madison Department of Horticulture, will present an interesting talk on the representation of vegetables in early modern art.

Was It Love at First Sight? How Did You Come to Study the Early Modern Period? 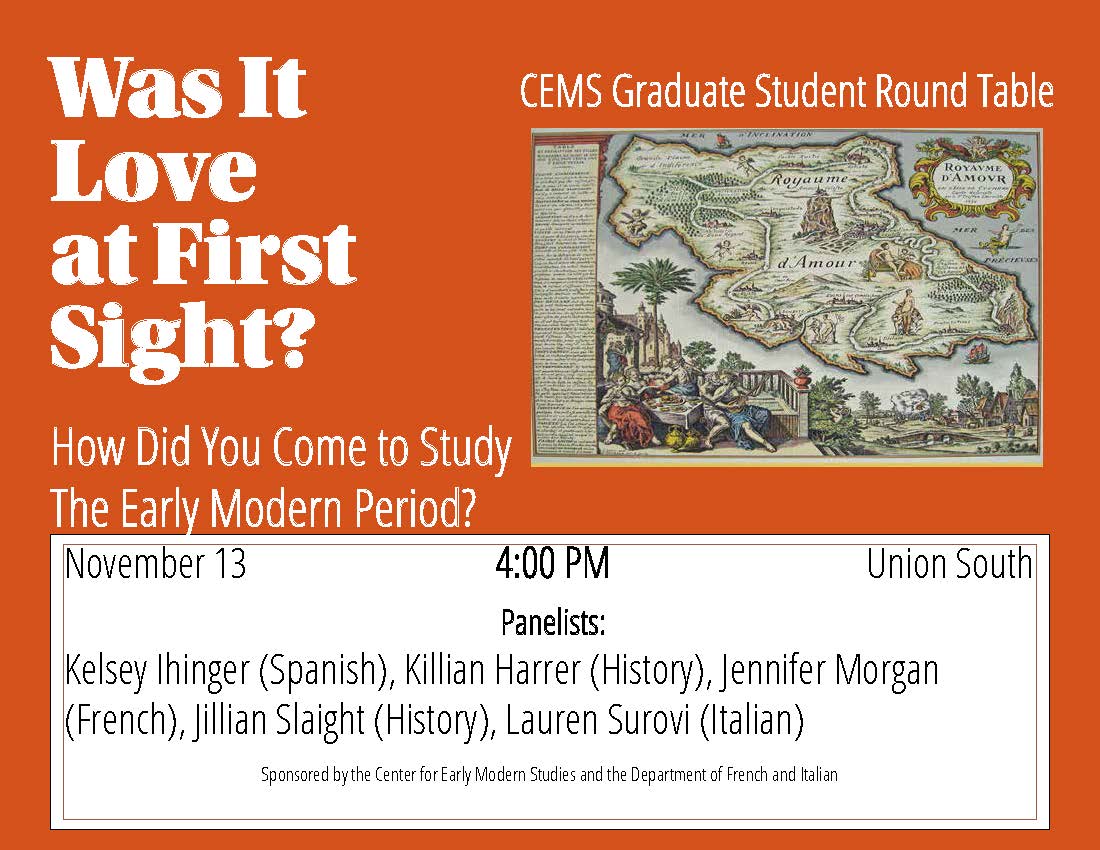 Please join us on Friday, November 13 at 4:00 for a graduate student round table that presents various journeys toward Early Modern Studies.