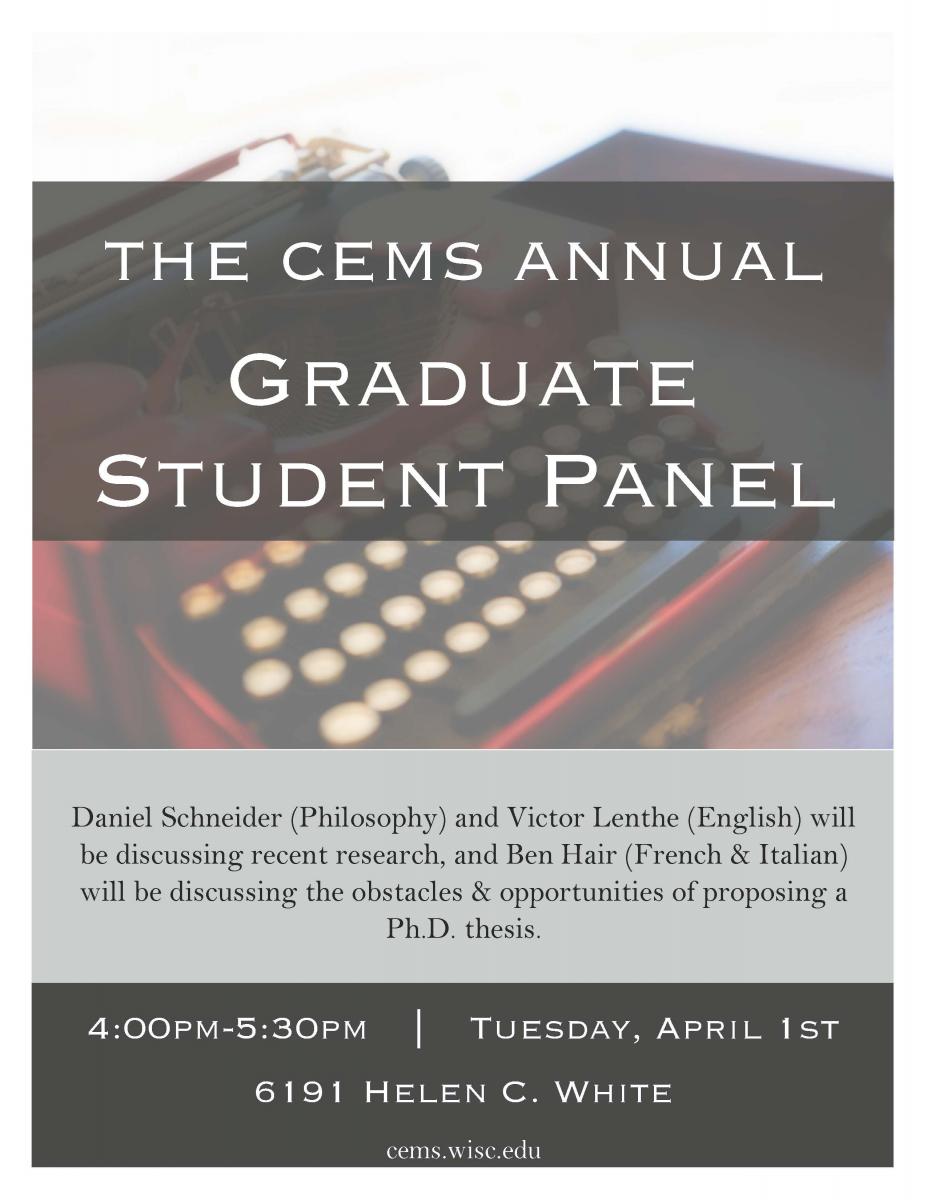 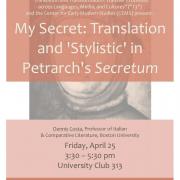 Francesco Petrarca (1304-1374) is arguably the greatest lyric poet between the Greco-Roman world and Shakespeare.  But his works in prose have been under-appreciated.  His Secret, a prose dialogue concerning morality (composed from 1353-1358), opens with the claim that what it is going to say may be so idiosyncratic as to remain absolutely untranslatable.  The Secret encodes a struggle between the very different rhetorical styles of its two interlocutors: an autobiographical character named ‘Franciscus’ and a character named ‘Augustinus,’ an emulation of the 5th-century theologian St. Augustine of Hippo.  Petrarch invites his readers, in the course of this dialogue, to try to achieve the same familiarity with his language as Petrarch already clearly had with the language of St. Augustine.

What becomes ‘translatable’, then,  for us, could be called a ‘stylistic’, or two ‘stylistics’—as Marielle Macé has recently employed the term—these characters’ two different “ways of reading” and as two different “ways of life”.  Petrarch’s reading of Augustine and of other writers of the Roman past allowed him, he believed, both to speak their languages and to revise the ideological contents of those languages for his own purposes.  Both these processes are kinds of translation.

Petrarch inherits a tradition according to which good translation (as opposed to a ‘rendering,’ piecemeal) is always, already an hermeneutic. What it occasions is not just this or that specific meaning but also an experience of meaningfulness that is not exhausted by the lexical and contextual meanings of words.  And that seems to be the function in the Secretum of a third (other, female) character, named Truth/Veritas.

We shall look at questions of translation and stylistic in excerpts from the Secretum in the original Latin, along with versions of these in English and Italian.  We’ll look as well at two of Petrarch’s Italian lyrics with English translations.

Texts for the session:

the texts are available online, but require the password: t3 [case-sensitive]

Co-sponsored by the Center for Early Modern Studies

The Department of History of Science presents

Prof. James Delbourgo (Rutgers), “Empire of Curiosities: Hans Sloane, the British Museum and the Collection of the World.”

Memorial Library Special Collections on Friday, May 2 at 3:30 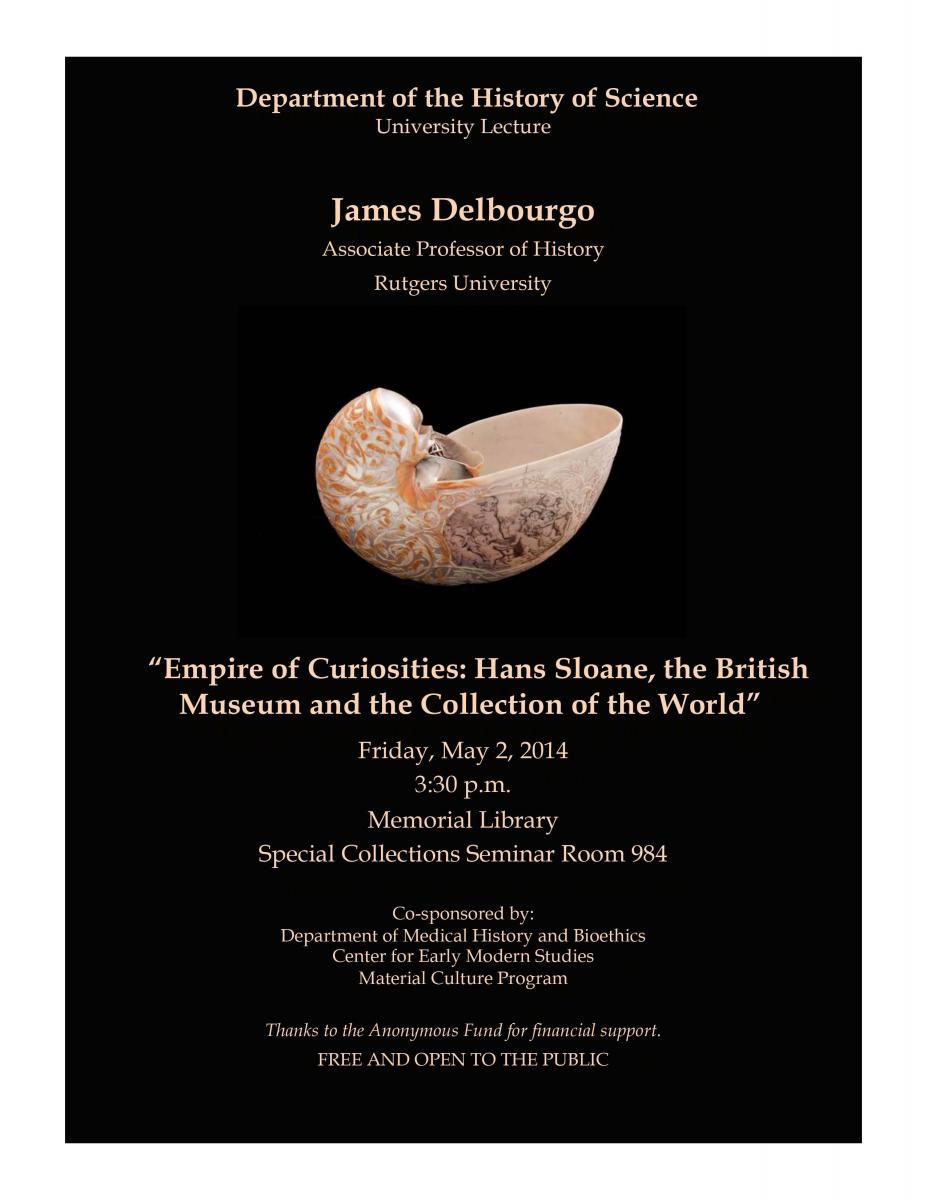 This talk explores the relationship between collecting things and collecting people in the career Hans Sloane (1660­1753), processes of global exchange, and the creation of value through eighteenth­century objects. The collectives through which Sloane gained access to curiosities from travellers in different parts of the world are examined, as well as those generated by the collections, from Sloane’s private circles to the establishment of the British Museum as a public institution upon his death in 1753. Sloane’s career helps to track the relationship between global networks and universal knowledge in the Enlightenment, the process of making things public in the eighteenth century, and the sometimes vexed status of the collector.

This lecture discusses a key transitional period in the history of the Atlantic world, of science and medicine and of museum history that will also interest a wide audience of people across several disciplines.

The Center for Early Modern Studies presents its 2014 conference :

“How to Say No to the Monarch : Legitimate Resistance to Sovereignty in Early Modern Europe” 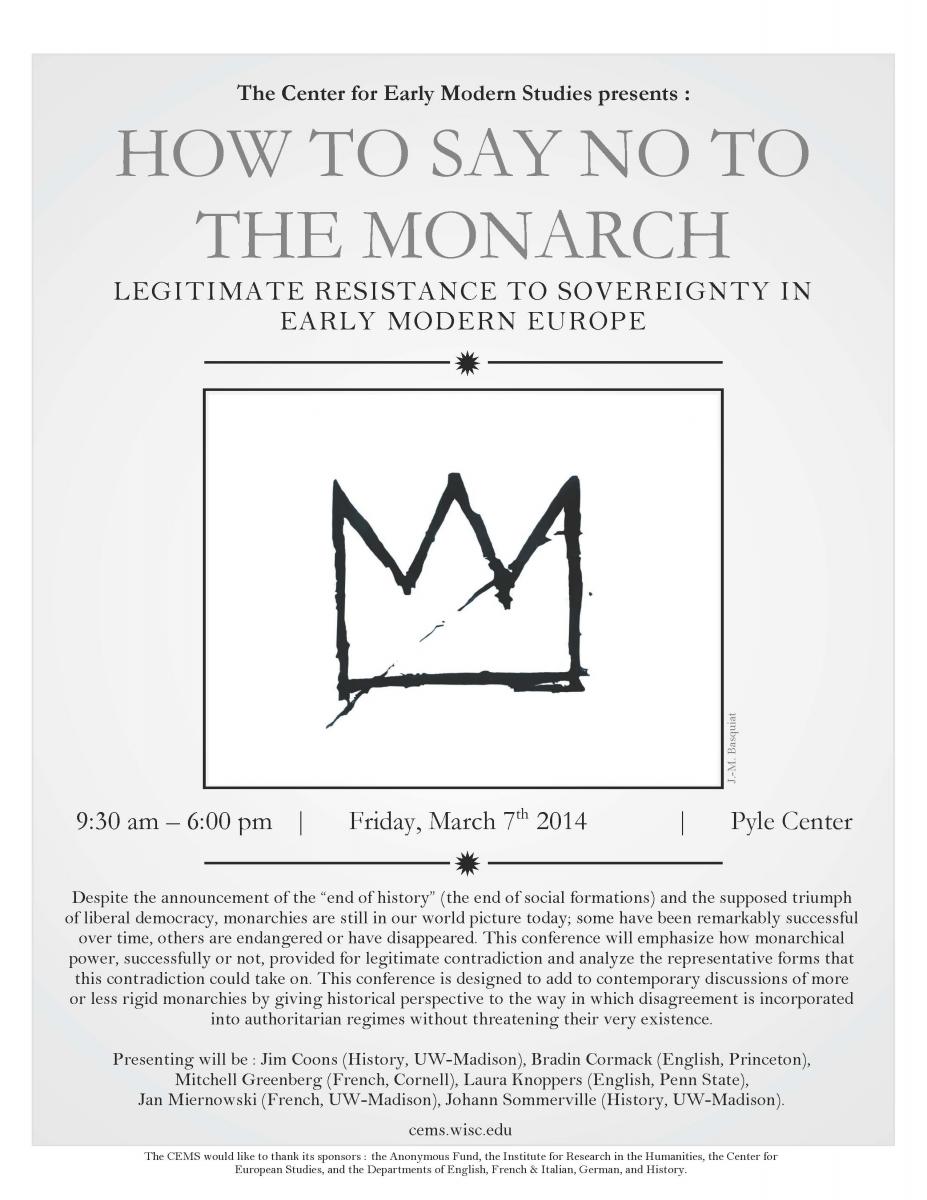 Friday, March 7th from 9am – 6pm in the Pyle Center

Despite the announcement of the “end of history” (the end of social formations) and the supposed triumph of liberal democracy, monarchies are still in our world picture today; some have been remarkably successful over time, others are endangered or have disappeared. We know that early modern monarchy, despite the spectacle of 17th-century “absolutism,” was far from all-encompassing in its power, and was much more mediated and empirically limited than its rhetoric would have us believe.  Instead of focusing on actual extra-legal civil or religious protest and conflict, this conference will emphasize how monarchical power, successfully or not, provided for legitimate contradiction and analyze the representative forms that this contradiction could take on. This conference is designed to add to contemporary discussions of more or less rigid monarchies by giving historical perspective to the way in which disagreement is incorporated into authoritarian regimes without threatening their very existence.

John Evelyn, seventeenth-century virtuoso, royalist, and Anglican welcomed the return of Charles II, but was soon recording in his diary criticism of the increasingly licentious monarch and court. While Evelyn’s massive treatise, Elyssium Britannicum, or the Royal Gardens, which he drafted, revised, and expanded for nearly fifty years, has been taken as an escape from politics, a deliberate separating out of the aesthetic, this paper argues that Evelyn’s royal garden constitutes both a space apart and a commentary on the king. Evelyn creates a virtual garden (based on his own extensive country garden) as a deeply regulated, self-disciplined space for pruning not only horticultural excess but the luxury (both sexual and material excess) seen in the Restoration court and king. Evelyn’s royal gardens keep in monarchy, but largely keep out his own monarch.

Focusing on Shakespeare’s analysis of authority as a function of its distribution in a social and epistemological field, this paper construes political resistance in the early modern period as a matter less of negating sovereignty, of saying no to the sovereign, than of pluralizing rule, as this is reflected in a political order but also in the structure of knowing and speaking themselves.

Making the Most of Treason : the Grand Condé’s Repatriation and the Construction of Absolutism

The process by which the Prince of Condé was allowed to return to France after his decade of rebellion underscored both the strong claims Louis XIV made on his subjects’ loyalty, as well as the concessions to circumstance that characterized his reign. This paper looks at the Crown’s response to Condé’s “no,” and the means by which it transformed rebellion into a lesson in national sentiment.

The fundamental ideological impulse of Classical theater is subtly undermined by the ambivalence of representation. A study of the three ‘canonical” dramatists, Corneille, Moliere, Racine demonstrates how literature is a “both/and” rather than an “either/or” of ideological conformity and political contestation.

The talk will survey the development of the theory and practice of resistance and non-resistance in sixteenth- and seventeenth-century Europe. The ideas of Protestants in Catholic countries and Catholics in Protestant ones will be discussed, as will the thinking of participants in the Dutch Revolt and the British civil wars. Especial attention will be paid to the question of whether violent resistance was more successful at changing government policy than passive obedience – the nonviolent refusal to obey objectionable orders.

The Polish Connection : Polish Republicanism and French Monarchy during the Wars of Religion in 16th-century France

The civil wars in France during the second half of the 16th century almost led to the destruction of the State. The power of the King was contested by a wide range of diverse political players – the Protestants, the ultra-Catholic League, in particular – but the arguments used were largely shared among the sharply opposed parties: the contractual nature of French monarchy, its elective origins, the traditional role of corps intermédiaires, the nobilities that wanted to moderate the absolutist ambitions of the kings, etc. Viewed from the perspective of the monarchy, these postulates evoked dangerous “republicanism.” The Polish monarchy, on the other hand, was indeed contractual, elective and explicitly branded itself as a “Republic” of Polish and Lithuanian nobility. To what extent do arguments in France refer to the Polish monarchy as a model? My paper will try to answer this question by reviewing the institutional mechanism of resistance put in place in Polish-Lithuanian kingdom by the nobility in the late 15th and in the 16th centuries, and by analyzing the references to the “Republic of Both Nations” in the French political pamphlets of the wars of religion.